skip to main | skip to sidebar

...so glad that you're here. We hope that even though we may be miles apart, we can share those special moments of our lives with you...whenever and wherever the occur. Just do us one favor...keep us updated with your special moments, as well! 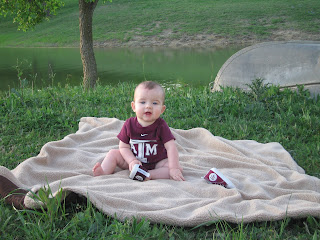 My sweet, littlest Aggie
Well, my littlest one is now 7 months...as of last Monday. We are definitely getting into those fun times. He is beginning to see more and want to explore more. It is so much fun to watch him as he grows. I definitely think that baby number 2 has things a lot better. He has baby number 1 as his constant entertainment. (I'm thinking that when baby number 3 rolls around...not anytime soon...he/she will only need me to feed him/her and change diapers...everything else will taken care of by the big brothers...yeah, right!!!).
During the last month, many things have happened for Micah. He is, as you can see, sitting up now and playing. He is rocking back and forth to get into crawling position and when we put him on the floor he can (with some assistance) balance on all 4's and rock back and forth, too. He went to the doctor for his check up, and despite the fact that he has barely gained a whole pound in the past 3 months, the doctor says that he looks good. And, yes, he does. For those of you that cannot see him in person...take it from me...the boy has rolls all over his legs, dimples all over...and look at those cheeks! This is just the way his growth is, said our doctor.
Here some links to some pictures over the past month. Enjoy!! Little Aggies and Mayfest 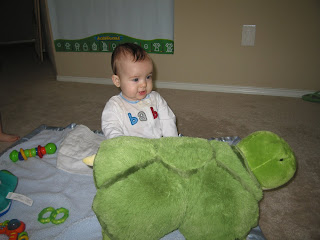 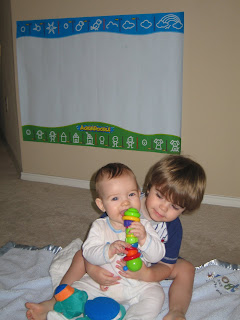 Current stats:
Weight--14lb. 11 oz.
Length--26.5 in. (my measuring)
Feedings--5 (but in the last two days, he has dropped one...we'll see if that sticks)
Meals--3 big ones
Snacks--2-3 (he must have a high metabolism
Favorite sleeping position--on his left side
Naps--2....morning and afternoon
Bedtime--Still around 7:30
Morning time--Around 6:45-7:15 (thank you Mr. Sun)
Teeth--1 on the bottom, center-right...but, number 2 will probably break through any day now
Favorite foods--Any kind of puffs, smashed up banana, applesauces, chicken and sweet potatoes
Favorite thing to do--Babble while rubbing his fist over his mouth
Favorite toys--Train that spins little balls around, Winnie the Pooh spinner, anything that rattles or crinkles, plastic cups
Things he wants, but can't have--The remote controls, our phones, the mail, Jonas' hair
Recent adventures--Riding in the shopping cart, sitting in a high-chair at a restaurant, taking baths in the big bathtub with Jonas, going to Mayfest, and the zoo 3 times!
Favorite thing to laugh at and with---Jonas...of course!!
Posted by Laura at 9:35 PM No comments: 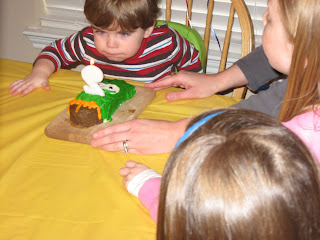 Well, I actually got on to blog about Micah turning 7 months and realized, I completely forgot about my big guy turning 2. Well, I didn't forget about him turning 2, I just forgot to write the blog about it. Sorry, Jonas! Click on this link to see the pictures! Jonas Turns 2

Last year, for Jonas' birthday, it was a beautiful spring day. His birthday is the first day of spring, so it should be that way. Not this year! Mother Nature had other plans. It was cold and....yes, snowy!

It was a VeggieTales themed party. I stayed up late the night before making his cakes. (Making some cakes that he'll never remember...he'll just see pictures of them and wonder why these cakes look so old-fashioned.....oh, the things we do for our kids). So, yes, despite the fact that he's two and he'll never remember these cakes...I did not care. Because, they were for him now...not when he's 20. I made a Bob and Larry for everyone to share and a Junior (Lyle the Kindly Viking) just for my Jonas. *I must put in a HUGE thanks for my mom and my Ryan...who also stayed up late w/ me...just to help!*

The big day arrived (his actual birthday, March 20) and so did all of our friends. Ryan cooked some delicious fajiatas and we all partied! The kids played "Pin the Tooth on Larry" and Jonas won!!!....only because he cheated! Then we had cake and presents....a good time was had by all. Especially, the birthday boy. Everyone passed out after the party...except for Ryan. (Micah took a little nap w/ me, but then Ryan took him so that I could sleep longer and he ended up falling asleep again in daddy's arms...awww!) Jonas took a nap w/ Mimi and Popi....Nana B got the short couch (bc she's so short...ha) and Papa Joe took the long couch (not like he's much taller, though...hee-hee).

When we woke up from our naps is when the snow started. We bundled up and headed outside to catch some snowflakes on our tongues and to release a balloon to remember Jonas' special day (and to kill some poor bird, I'm sure).

We had so much fun!!! The only thing that was missing was Ma-ma, Pa-pa and Aunt Hayley. But, they could not be here...Aunt Hayley was off and away winning state championship for her Color Guard!!

Yes, it's only been two years...that's not much compared to a lifetime. But, my-oh-my what a two years it has been. This boy is such an adventure. I love everything about him! I know that I speak for Ryan, too when I say that he (and his brother) are the best blessings we have ever received. Thank you Lord, for this amazing gift! I pray that we will teach him to grow in your ways, so that when he returns to you many years later, he would have been the best man he could ever be!

I love you, Jonas Ryan Flood.
Posted by Laura at 12:06 PM No comments: 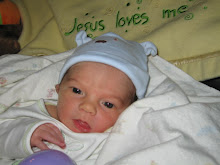 Look at our pictures!